Hi everyone! My name is Anyssa and if you are keeping up with my journey and Traklife On the Go, you know that I am traveling the country in search of adventure, local music happenings and culture. This week my travels took me to another Midwest town called Hammond, located in Northwest Indiana. Every year the town puts on an event called “Festival of the Lakes” and as its name suggests, it takes place lakefront at Wolf lake Memorial Park. The town is quite small and industrial with not many things to do for the younger crowd, so when the fest comes around, everyone in Hammond (and neighboring towns) come down to Wolf Lake.

After doing some research and speaking to a few locals who attend every year, I discovered it is in fact the biggest, most popular event the town holds all year. Part carnival and music festival, the event has something for everyone and attracts people of all ages. Being a music enthusiast, I was more concerned with the musical acts that would be performing. Considering Hammond is a very small town that popular musicians don’t regularly play, I was expecting the lineup to consist of local, unknown acts but to my surprise, it was quite the opposite. In past years the musical lineup for the festival has included bands such as Sublime with Rome, NAS, Sugar Ray, The Roots, Flo Rida and Bush. The festival spanned from July 13th to July 18th with the most popular bands playing Wednesday to Saturday. The musical acts were quite impressive and diverse ranging from rap to country. The big names of this year’s lineup included renowned artists Nelly, Busta Rhymes, Twista, Blvck Ceiling, Limp Bizkit, REO Speedwagon and Sammy Hagar. 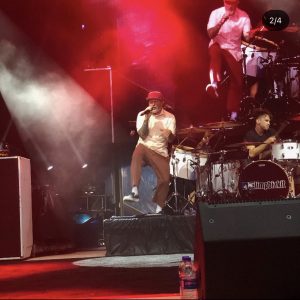 My husband and I love rock music so we decided to attend Thursday to catch Blvck Ceiling and Limp Bizkit. Upon arriving we found that parking was quite a challenge as the paid parking lot was full and street parking was hard to find. After parking, we headed into the event and were delighted to find it was free admission, though guests could buy VIP tickets to get access to better viewing areas. We arrived an hour before the show began so we took advantage of the time by grabbing drinks, having fun on the carnival rides and walking along the lake. As showtime drew closer, we opted to stand far back to distance ourselves from the hundreds of people packed in around the stage. Blvck Ceiling, an electronic dance band with a goth look opened the show getting everyone riled up for the main act. The crowd response was mixed as many were there solely for the main event but even so, most of the crowd was dancing along and cheering. As the opening act ended and Limp Bizkit’s set grew closer, the crowd doubled in size with everyone chanting in anticipation. After about 15 minutes of tense waiting, the lights dimmed and the crowd erupted into maddening screams of joy. 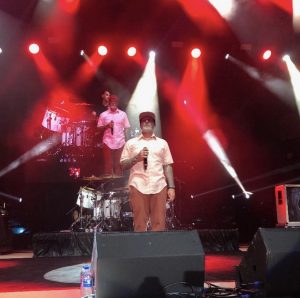 Limp Bizkit took the stage and finally Fred Durst walked front and center to a roaring crowd. Wasting no time, the band jumped right into a few classics to set the mood starting with “Hot Dog” from their 2000 album, “Chocolate Starfish and the Hot Dog Flavored Water.” Four of the five original bandmates were in attendance which included singer Fred Durst, guitarist Wes Borland, bassist Sam Rivers, and DJ Lethal. In true Limp Bizkit fashion, Durst sported his famous red baseball cap and Wes Borland was decked out in a bizarre, creature-like facemask with white eyes and face paint. As the set went on, the crowd’s dancing progressed into multiple mosh pits when hit songs “Break Stuff” and “Generation” were played. The band’s setlist consisted of 18 songs total, one of which was a cover of DMX’s “Party Up (Up in Here)” to pay tribute to the late rapper. Festival of the Lakes was one of the first shows the band has played since the pandemic hit and Durst commented how great it was to be back. This was the second time Limp Bizkit has played Hammond as they headlined for the festival back in 2017. Standing in the back observing the show and crowd was amazing. The energy the band gave the crowd gave right back, screaming along and throwing themselves all around. It was clear to see that although the band has aged, Limp Bizkit still brings something unique to the table that keeps bringing back the old fans and attracting new ones. The set lasted a bit past 10 as Durst joked with the crowd saying, “Your mayor says we have to stop playing now!” In response, fans erupted into loud screams and shouts of protests. The band finished off the night with their classic song “Take a Look Around,” famous for making the crowd go crazy with its up and down building rhythm. With one last chance to go crazy in the mosh pit, the fans did not disappoint. With the song over, the band left the stage and the crowd cheered, drenched in sweat, dirt, and other battle wounds from the evening. 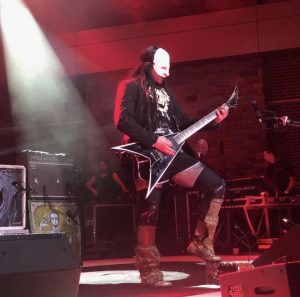 As people began to disperse and find their way home, I followed along leaving thoroughly amped from the show and in awe of how much energy came from the band and the crowd. All the musical acts of the night put on a great performance and is no doubt the reason this Festival gains popularity every year. I was overall very impressed with the town’s festival and did not expect them to pull in such renowned performers. Considering the great lineup every year and the fact that this event is free, it is something you cannot miss. Next time you find yourself in the Chicagoland area for the summer, make time to attend Festival of the Lakes in Hammond Indiana. You will be blown away by the larger-than-life concerts in this small Midwest town.

For more information on Festival of the Lakes, visit their website   https://www.festivalofthelakes.com/