Hello! My name is Anyssa, I am a visual artist from Los Angeles who loves to travel, spend time with my dogs and attend concerts. My love of all things music stemmed from having a father who was a drummer and a mother with great musical taste. I spent my childhood traveling the world with my family watching my father perform his music and seeing just how much music impacts people’s lives. As an avid music lover and someone who has experience in the industry, I have begun my own journey as a production intern here at Traklife and am bringing creative musical content in a new way. 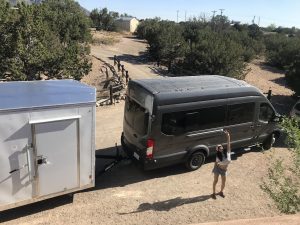 Our temporary home on wheels

Last year, the pandemic turned our world upside down and live music events halted leaving many people like me a bit depressed. Now that 2021 is in full swing and vaccinations have arrived, my husband and I decided to do something a bit different. This summer we ditched our apartment in LA, bought a van and set out on a year of non-stop traveling and adventure, exploring the nation and the music it has to offer. With only our sense of adventure (and GPS) to guide us, we explore the local happenings and dive deep into the local music community.

Our first destination on this whirlwind adventure was the Midwest, more specifically, a town called Griffith in Indiana. A small town located in Northwest Indiana and just 40 minutes south of Chicago, Griffith is a unique, up-and-coming place mixing the old generation with the new. Microbreweries and hipster coffee stores sandwich mom and pop style shops that look as though to be unchanged since the 1940’s.

The winters in Indiana are known to be long and bitter so the people here take advantage of the summer months by throwing multiple festivals and outdoor concerts. We were lucky enough to arrive at the end of June for the town’s most popular annual event of the year, Broad Street Blues and BBQ Festival. Three days of local craft beer, Midwest barbeque and of course, some of the region’s most talented and prominent blues musicians. The free outdoor festival located in Griffith Central Park boasted 2 stages and a total of 17 musical guests which included blues legends John Primer and Billy Branch. The demographic was predominantly people in their 50’s or older, but there were also many families and the occasional young adult with an old soul and a love for the blues. 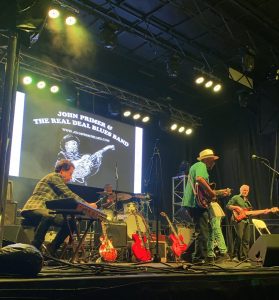 I attended the festival Saturday night with my husband and some family to catch the headliners. With a beer in hand and the smell of smoked meat in the humid air, I wandered to the front of the stage amidst a dancing crowd and a sea of lawn chairs to catch John Primer and The Real Deal Blues Band. John Primer, a two-time Grammy nominated artist, stood center stage plucking away heavy notes and sang deep, powerful lyrics that drove the crowd wild. The only thing more mesmerizing was the band playing behind him. Electrifying keys and a passionately played harmonica that transported you to the roots of blues. The band also performed with a special guest; renowned blues musician and Chicago native, Lurrie Bell. Bell joined the ensemble and was seated center stage while Primer faded to the back to hand over the spotlight for a few songs. Bell looked the part, decked out in a black suit, a sharp hat, and a bright red guitar in hand. Bell played the guitar with quickness and ease, tapping his feet to the rhythm while his thundering voice belted out blues. With every note I could hear the history behind the music and the lifetime of dedication each member of the band put into their craft. The music transported me into another state of mind and gave me a deeper appreciation for the root of modern music. 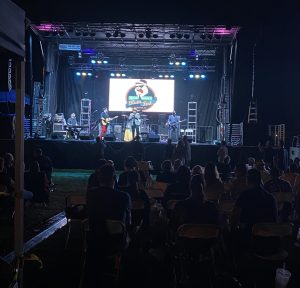 As the set came to a close, it began to rain but that didn’t stop the festival. The crowd kept up their pace of dancing and drinking despite the weather and the bands didn’t seem to mind either. Up next was Billy Branch, a legendary blues harmonica player and three-time Grammy nominee. The crowd cheered as the band took the stage. Just like Primer and Bell, Branch sported a snazzy suit and hat to tie in the vibe.  Branch introduced his fellow bandmates and without skipping a beat, pulled out his harmonica and dove right into the music. Cheers from the crowd erupted as Branch effortlessly made the harmonica sing. I was blown away at how he made the instrument sound so diverse, it was unlike any harmonica playing I had ever heard! The set carried on well into the late hours of the night but after a long day, my husband and I decided to head home during the last few songs. 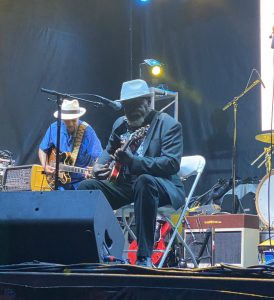 Although Griffith is a small town, I was thoroughly impressed by the notable talent they were able to lock in for the event. I went to this festival not expecting much but left with an unexpected feeling of euphoria. The music was nothing short of sublime and allowed me to see the genre in a new light. Blues is an artform, a story, and it paved the way for the music we have today. If you consider yourself a true blues fan and love some great local barbeque, check out the Broad Street Blues and BBQ Festival in Griffith Indiana. You won’t want to miss this hidden gem!